Great Post.... I'm tempted to push Pete down some stairs so we can get some denim ripped up and needy of repairs.... I mean... I WOULD fix them...

Posted by jimmy the pick
Repairs on the little one's blue jeans.
Holes get cut clean around edges, folded back and glued. 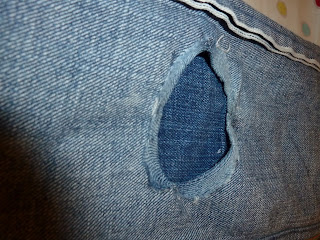 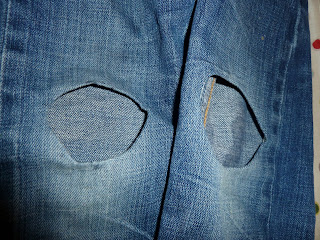 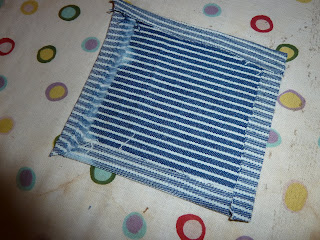 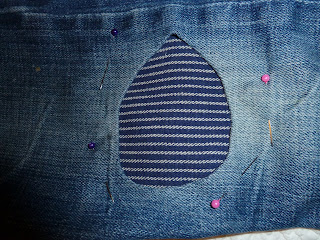 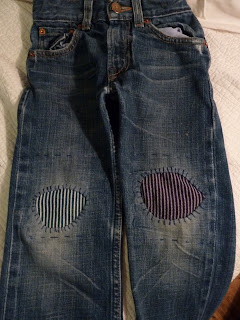 Getting Gov't Spending in Line. First to go: The .5% that goes to those who actually need it

The Right’s War on Peas and Carrots

On the most recent Real Time with Bill Maher, Bill and his panel spent a significant amount of time discussing the current fight over the budget for FY 2011 (or what’s left of it). As we saw last week, the House Republicans (with zero Democratic votes) passed a budget resolution filled with drastic cuts to numerous government agencies and programs, and thereby fulfilled their arbitrary campaign promise to cut $100 billion from the President’s proposed spending levels. Bill, as a way to crudely illustrate the Republican strategy, pulled out a dinner platter which represented U.S. spending as a whole: heaping piles of fried chicken, mashed potatoes, and macaroni and cheese represented social security, medicare/medicaid, and defense spending. Instead of attempting to tackle these huge chunks of our budget, however, Congressional Republicans decided that they would instead go after the tiny corner of mixed vegetables which represents non-security discretionary spending. In the House Resolution, peas and carrots like home heating assistance for low-income families, medical research at the National Institutes of Health, Pell Grants, assistance for homeless veterans, and Planned Parenthood funding, were all cut in a frenzy. At the same time, Republicans easily avoided cost-effective cuts like reductions in the billions of dollars in annual subsidies to oil companies. It was truly a triumph for partisan ideology. While these types of domestic programs may represent the peas and carrots of our budget when it comes to a percentage of the overall “meal”, when one considers the fact that they save lives and provide essential services to the American public, their importance seems more analogous to the meat and potatoes of Bill’s not-so-well-balanced dinner.

Perhaps the clearest example of the all-out ideological attack on a tiny part of the budget which provides a huge return on its investment is the attempt to slash the Environmental Protection Agency:

H.R. 1 cuts the Environmental Protection Agency’s budget by almost a third and hamstrings the EPA’s ability to protect the environment and Americans’ health. For example, the measure prevents the EPA from protecting communities from mercury, lead, arsenic and other toxic air pollution from cement plants, leaving thousands of children exposed and at risk of asthma, slowed brain development and other neurological disorders. The EPA safeguard that the measure blocks would have reduced mercury pollution by more than 90 percent and saved 2,500 lives each year.

Some of the other numerous provisions in the House Resolution targeting the environment and public safety would: interfere with the EPA’s ability to limit toxic pollution from coal-fired power plants, exempt oil companies from Clean Air Act review for drilling in the Arctic, prohibit the EPA from setting new health standards limiting coarse particulate matter in the air we breathe, stop the EPA from implementing certain portions of the Clean Water Act, thereby threatening drinking water and potentially leaving wetlands unprotected from pollution, and Eliminate EPA funding that would enable the agency to use the Clean Air Act to curb greenhouse gas emissions, including carbon dioxide, methane, and hydrofluorocarbons.

The EPA’s budget represents about 0.1% of total spending, yet House Republicans have been eager to attack policies and programs at every turn, and are quick to claim that EPA regulations threaten jobs. The GOP needs to realize that their radical attacks on environmental protection just aren’t in line with either the American public or the facts:

The many people who were frustrated with government in the 2010 elections and voted for Tea Party members probably did not realize they were voting to “gut” environmental protections that Americans have enjoyed for the past several decades. A recent poll about proposals to weaken Clean Air Act rules indicates that members of Congress pushing to weaken environmental protection are distancing themselves from the electorate. Meanwhile the proposed budget cuts bear a striking resemblance to the Santa wish-list of K Street coal, chemical, oil and gas lobbyists. These lobbyists came late to the Tea Party, but made up for their tardiness with dollars.

The environmental and economic benefits provided by EPA’s work are visible in communities across America, ranging from reduced smog to cleaner waters and the all but end of indiscriminate hazardous waste dumping. These improvements have led to billions of dollars in health benefits that even the George W. Bush Administration catalogued. The dollars these safeguards have saved come primarily from reducing the number of Americans who become ill because of pollution.

The cost of the programs responsible for these improvements is a relatively small portion of the federal budget, and thus a very small percentage of the average American family’s tax expenditures. Yet, the benefits derived from these programs are extraordinary: clean air for our children to breathe, clean water for our families to drink, healthy public lands for people to recreate on, and clean oceans to support healthy fisheries and the livelihoods tied to this precious resource.

I highly recommend this article, which discusses the benefits of EPA regulation for workers:

A study just released by Ceres and the Political Economy Research Institute of the University of Massachusettsexamines the jobs effects of some of the new regulations, specifically ones that have been harshly attacked by EPA critics. This well-documented study finds that far from being “job killers,” the new regulations will create nearly 300,000 new jobs, especially skilled, high-pay jobs for engineers, project managers, electricians, boilermakers, pipe-fitters, millwrights, and iron workers.

The new study joins a large number of previous studies showing that EPA regulation, in addition to protecting the environment and the public’s health, also serves as a job-growing economic stimulus and development program for the American economy. These studies directly contradict the endlessly repeated mantra that environmental regulations are “job killers.”

The cost of compliance with EPA regulation is generally less than two percent of total business costs. The idea that companies will shut down or go abroad to avoid such costs is ludicrous. However, companies often try to blame shutdowns and runaways on environmental compliance costs as a way to displace responsibility from other causes, such as new technologies, increased productivity, fluctuating energy prices — and their own corporate strategic decisions.

It will be an interesting next couple of weeks on the Hill. Fortunately, the House Resolution with its partisan cuts is dead on arrival in the Senate. The current Continuing Resolution (CR) runs out on March 4th, and as Congress is off this week, that leaves just a few working days to pass something before then to avoid a government shutdown. As it stands now, it looks like Democrats in the Senate want to pass a “clean CR” which would keep spending levels the same for another month, and allow proper time for debate and compromise with Republicans. The GOP, on the other hand, seems only willing to accept a temporary extension if it includes some level of cuts. Something’s got to give. One thing’s for certain, however. While Americans generally favor spending cuts to reduce the deficit, when it comes to specific programs, we’re actually closeted big government spenders. In a recent Pew Survey, while fewer Americans want spending to grow in specific areas, most cuts to programs are unpopular. Double-digit percentages of the public actually favor increased spending levels over cuts in education, veterans’ benefits, health care, medicare, combating crime, energy, scientific research, and yes, environmental protection. In another recent survey, most Americans oppose restrictions on the EPA.

While Republicans think they have a mandate to slash the peas and carrots of our budget, perhaps they should think again and recognize that while Americans generally support spending cuts, there’s little support for ultra-partisan political posturing. Maybe it’s about time to take a hard look at reducing that huge, gooey heap of macaroni and cheese.

Hey look, when you're a blogger/photographer, not even your barber is safe. I talked Jason into a couple snaps between a straight shave and a cut... and sushi. Tims and a saturdays tee... you can take the kid outta the East, but you can't take the East outta the kid. East meets West done right.

(today on atimetoget)
Posted by Craft at 10:37 AM No comments:

I WILL see this factory, sooner or later. . .

We are extremely proud and excited to be the very first place where David Himel's extraordinary handmade leather jackets can be seen, purchased, and custom ordered in person. Available in the finest goatskin and horsehide leathers, these jackets are truly fine examples of old world craftsmanship. Please call or email us at info@craftworkwear.com for details and availability of specific model's and sizes.
About the brand:
"HIMEL BROS. LEATHER 80 years of bespoke and production leather manufacturing knowledge. We are committed to recreate the processes, techniques and styles of the modern industrial age, to make perfect garments that can be worn through generations. Every design, part and detail has a purpose-built essence that will bring the past into today. Our jackets are a perfect melding of people, leather and craftsmanship, made with respect and time.

This is a time when jackets were transformed from homemade, cloth jackets, outdoors jackets and military jackets to new purpose built sporting jackets."

I want these, but in roughout black w/ brown edge trim.
Posted by Craft at 1:25 AM 3 comments:

Been listening to the Stylistics channel on Pandora all day.... Has yet to disappoint. Smokey Robinson? Oh yes. The O'jays? Fuck yeah.
Do yourself a favor.... Get your girl half "in the bag", as my charming lady puts it, and put this shit on.
Posted by Craft at 3:47 PM No comments:

Taking shape really nicely... Amazing how a few weeks of wear bring out the grain in the horsehide. Its gotten buttery soft, nice a drapey, and lost most of that new jacket leather creakiness...
Rubbed with a warm damp cloth take a litte of the shine off the leather, and oiled once to soften it a bit...
I pulled the side tabs tight to give it a close-waisted fit without getting tight in the shoulders or arms.... Great range of movement without the whole jacket pulling up over my gut when I raise my arms...
One Medium left in stock