(CNN) -- The mass deaths of thousands of red-winged blackbirds in Arkansas was caused by "blunt force trauma," according to a new report by the Arkansas Game and Fish Commission.

Laboratory tests were conducted on 13 of the birds that were part of the group that flew into buildings and died in a neighborhood in Beebe, Arkansas, 40 miles northeast of Little Rock.

"The tests ruled out bacteria, viruses, heavy metals, pesticides and avicides (chemicals used to kill birds) as causes of death," the commission said in a statement.

These results confirmed preliminary tests that were conducted after the incident.

The tests revealed hemorrhaging "consistent with blunt trauma," according to the report released Wednesday. "In most instances, such traumatic injuries in wild birds are due to flying into stationary objects such as trees, houses, windows, power lines, towers, etc.". . ."

Ok, I'm calling bullshit on this. 5000 birds all flew into buildings all at once? And no-one saw it? Heard it? Now, I'm not a Science-tician but I'd be willing to bet that the blunt trauma seen in the 13 (13?!? out of 5000!?) birds could be from them HITTING THE DAMN GROUND..... AFTER whatever caused them to drop had already happened....

Anybody finding info that sounds more plausable or likely, please send it along in the comments....

Why you buy tan roughout boots

I want a bronze watch

Thank you Fareed.... For speaking to Americans like grown ups!

Worn about 6 months (Thanks Eric for letting us shoot these...)
Told you the Copper Rough and Tough leather ages well. . .
Posted by Craft at 12:58 PM No comments:

Put This On: LBJ Buys Pants from Put This On on Vimeo.

“In 1964, Lyndon Johnson needed pants, so he called the Haggar clothing company and asked for some. The call was recorded (like all White House calls at the time), and has since become the stuff of legend. Johnson’s anatomically specific directions to Mr. Haggar are some of the most intimate words we’ve ever heard from the mouth of a President.
(via. put this on)
Posted by Craft at 11:30 AM No comments:

Iran's answer to John Stewart's Daily Show. Real satire from a culture and state that views satire as treason. Bravo Gents.
(Their Blogspot Here)
A great clip from Daily Show last night.... That refuses to embed for some reason... I'll work on it.... but till then:
http://www.thedailyshow.com/watch/thu-january-20-2011/exclusive---kambiz-hosseini---saman-arbabi-extended-interview
Posted by Craft at 11:36 PM No comments:

Many of you are familiar with Chrome-excel leather from Chicago's Horween tannery. Chromexcel is a chrome tan, veg. re-tan, hot stuffed leather. The oils and waxes embedded in the leather move around when the leather is flexed, giving the hide beautiful highlights and lo-lights. This color changing quality is called "pull-up".... (You'll often see craftsman stretch leather swatches over their thumb to see the color change). In the eyes of patina hunters, pull-up leather is sought after for the explosion of texture you get as soon as you start wearing your boots. For outdoorsmen, the oiled hides are well regarded for their water resistance, and durability.
Red Wing's most handsome pull-up leather is their Copper Rough & Tough, as seen in our newest model: The 9111. A round toe boot built on the same #8 last as the Gentleman Traveler. They find a cozy niche between the stiffer 8'' moc toe syles and the lower chukka's. The Copper leather is rusty, medium brown with a nice waxy feel, and yes..... great pull-up.
Head Barber, Jason at Baxter Finley next door got the first pair.... We'll check in on his in a few weeks as they wear. Plenty more in stock, ready for new homes. 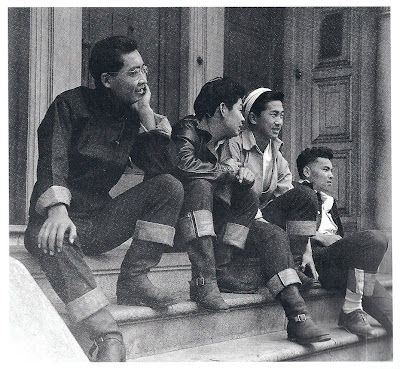 "Certainly one of my favourite photos by Dorothea Lange taken in 1942. This goes a long way to show that not much is new. Engineers boots and big selvage cuffs that predate every style icon we though we had."
(via Papa Nui)
Posted by Craft at 10:44 PM No comments:

My Dad caught this one.... Good eye Old Man!

LIVERPOOL, N.Y.—Many have tried, but no one has ever come up with a more elegantly simple way to measure the human foot than Charles Brannock, inventor of that ubiquitous metal gadget found in shoe stores and known, fittingly, as the Brannock device.

Created in the 1920s, Mr. Brannock's tool is among the most enduring industrial designs ever. The company's original paperwork now resides in the Smithsonian Institution. Cameron Kippen, a foot historian and podiatrist in Australia, calls them an "icon of quality" that changed the way shoes were fitted.

Allen Edmonds Shoe Corp.'s chief executive, Paul Grangaard, keeps one in his office. He used it most recently to measure the foot of Osmo Vanska, the Finnish music director of the Minnesota Orchestra, to whom he was giving a pair of shoes.

There's even an alternative-rock band in Kansas City called "The Brannock Device," a name picked, according to one of the band's founders, guitarist Jeremy Schutte, because the drummer once worked in a shoe store. "We loved the name," he says. "There's a little nostalgia to it—going to the shoe store and getting your shoe fitted."

But defending the Brannock legacy from competitors, who produce cheaply overseas, has become an uphill battle. Sal Leonardi bought the Brannock Device Co. Inc. from Mr. Brannock's estate in 1993 after the inventor died at age 89, and he promised to keep the factory in the Syracuse area for at least five years. That was an easy pledge for Mr. Leonardi, a passionate advocate of American manufacturing. He says he bought Brannock in part because he figured its then domination of a microscopic industry would assure its success.

Its 1929 patent, however, expired long ago. Over the last two decades, the Brannock device has become a target for copycats. Although Mr. Leonardi won't give details on sales at the closely held company, he says foreign-made devices have cut into his market.

There isn't much the company can do to stop imitators. Mr. Leonardi's attempt to trademark the product's distinctive shape was rejected. "We don't mind competing with someone making a foot-measuring device, but not if they can make them to look exactly like ours," says Mr. Leonardi. Which they can.

Nobody else can call it a Brannock device, since the name is protected by copyright. Beyond that, just about anything goes. And does.

In his office the company's tiny 10-employee factory outside Syracuse, Mr. Leonardi keeps a handful of copies. One knockoff even includes a copy of Brannock's original instruction sheet—with only the name of the company changed.

The fuzzy photos on the knockoff's instruction sheet are of Mr. Brannock's own hands holding the device, and of the inventor using it to measure a woman's foot. The copycat device is such a faithful imitation that it doesn't include modifications made to Brannocks by Mr. Leonardi over the past decade, such as slightly streamlining the knob used to mark the ball of the foot.

Marvin Bearak, whose company makes that particular copy in China, says it's possible they copied the instructions early on, but they have since updated the instruction sheet. "We basically knocked it off, reverse-engineered it," says Mr. Bearak, president of Chicago-based Justin Blair & Co., a maker and distributor of shoe-store equipment.

The driving force is price, he says. An authentic Brannock made in the U.S. sells for about $60, while Chinese-made versions sell for less than half that. Mr. Bearak's product is called a "Ralyn foot measuring device," but held alongside the real thing, it's difficult to see much difference.

Brannock has a complex relationship with its imitators. Mr. Bearak's company, besides selling the Chinese-made knockoffs, distributes authentic Brannock devices purchased from Mr. Leonardi. Some customers insist on the real thing, says Mr. Bearak. Others want to save money.

David Murphy, president of Red Wing Shoe Co. in Red Wing, Minn., is among the purists. He says the firm specifies authentic Brannocks when it opens new stores, and he doesn't mind paying over twice as much for them, "because they last forever."

"A Brannock device is very, very important to us," he says. "We train our people on them."

Mr. Brannock was the son of a Syracuse shoe merchant who began developing his device while still a student at Syracuse University. At the time, the main tool available was the "Ritz stick," a simple wooden ruler that gauged only foot length, not the other dimensions measured by a Brannock. Mr. Brannock made his prototype out of erector-set pieces and applied for a patent in 1927.

They were an instant hit, though business really took off during World War II, when the government contracted Brannock to produce a version of the device that allowed soldiers to have both feet measured at once. That sped the process of distributing footwear.

Jonathan Walford, a shoe historian, says there is a "whole Brannock field out there—guys who collect and are really into them."

Beyond low-cost copycats, the biggest challenge facing Brannock today is that many people buy shoes on the Internet or in self-service stores where getting fitted by an expert isn't an option. New technologies also have emerged to measure feet electronically, but those systems are far more costly.

Back at the Brannock factory, Mr. Leonardi says substituting cheaper materials isn't an option. Mr. Brannock insisted his devices be made to be as durable as possible, so Mr. Leonardi has resisted advice to reduce prices by using plastic or other materials. "That's something Mr. Brannock would never accept," he says, "and neither would we."

I think I like it less every time they changed it... Anybody else?

"You can slip out the back Jack or you can put up five 10 x 23 foot billboards in your neighborhood. Adios LA is a visual goodbye to the city Jon Jackson has called home for years as the artist heads east making New York his new home. Not wanting to string LA along, he has decided to firmly break it off through a graphic billboard series posted on the famous streets of his first love. Most take Mr. Simon's advice when leaving town, but if you want a city with benefits you better do more than make a new plan Stan.

If you are in Los Angeles from the 17th of December to the 15th of January, you can use this site to give you the locations of the outdoor boards so you can drive by and see the break up in process. Bring a camera and box of tissue." (adiosla)

The Oh-Eleven is NOT fucking around.