..Pull into the parking lot.. Son of a bitch!!! Some jerk (with a sweet Maserati Quattroporte, but taste aside this is a rant of sorts) is parked in the spot that cleaaarly reads craft. Doesn't prevent the person from doin it though. And I'm thinking, undoubtedly this person is a discourteous (PRICK) "master of the universe" who thinks they have the power to park where-ever they please.. So I, followed this bad example, and parked in a spot that's not ours. But having every intention of leaving a strongly worded note for this creep on how this kind of action not only starts a chain reaction of a prickish free for all of space stealing, but is just plain rude and ill mannered.. When boom!! I see this note. 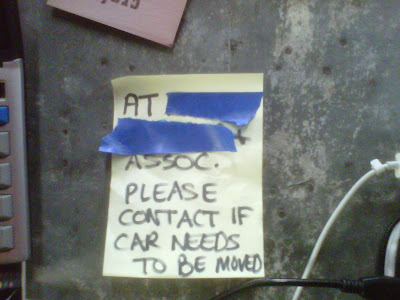 A simple little courteous gesture that kinda says yea, I'm a prick, but never the less a prick with some manners. (I know what you're thinkin, and hopefully you caught it, yes there was a number to call at the bottom, but I removed it because the temptation to post it up in various bathroom stalls in our greater west hollywood area was present) And with all that said because the person simply just left a note, I didn't even bother callin to have em move it, I just took a small amount of comfort in the fact that although every one of us has our moments when we can be pricks, somewhere in that same moment the fibers of humanity and courtesy exist, ya just got to choose to utilize em, and when we do it goes a looong way..
Posted by Craft at 2:15 PM No comments: 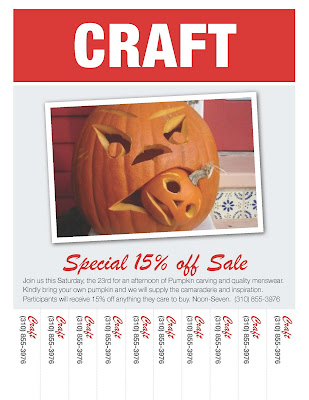 Back when I used to remember things....

By age 13 I knew I wanted Red Wings. I didn't have a clue what Red Wings were, but I knew I wanted those white soled boots that I always saw construction workers wearing. The ones with the stitching around the toe. The shape of them was just right....with that tall toe profile, that perfectly aged caramel leather, and the soles that looked so cool worn down and rounded out a little bit. But my shoe world, at the time, was only as big as Sneaky Pete's, the local sneaker store where I had been taken to get my sneakers at the beginning of each school year.
Then a life changing moment: We were on a family vacation (god knows where, and I'm sure we all were fighting).... and as I turned a corner in the shoe shop we were in, there they were.... Those boots!! In a store! That red winged logo!! And a brand name! Red Wing. Now I knew what they were. How to find them. It wasn't until college that I bought myself a pair, but it was that defining moment on vacation with my folks that I could put a name to the mystery shoes I was lusting after. They were real. They were perfect. My first boot love.
I am proud to stock Red Wings in my shop. They were just right before workwear was hip, and they'll still be just right after its passe to the masses.
In-Stock: 8139, 8878, 3143, 3144
Posted by Craft at 1:50 PM 3 comments:

Back by Popular Demand

The fellas from Lightning Magazine were kind enough to send us the newest batch of issues. We're also proud to grace the pages of the issue this month with Marlon Brando on the cover.

(I can only imagine they came with baked goods.... Look at that smile on Pete's face!)
Posted by Craft at 3:28 PM No comments:

Got my first pair of Danners today. Handsome boots, and amazingly comfortable out of the box. You guys wear Danner?? Any testimonials you care to share? Break in tips?
Posted by Craft at 5:16 PM 3 comments:

And incidentally..... Good for MLB.com for putting together a streaming package I am actuallywilling to buy.... only $10 bucks for the whole postseason!
Posted by Craft at 3:37 PM No comments:

First: The Hunting Vest. Mid-Weight wool and Wax Wear brand Waxed Cotton. Traditional fit. Amazing feel. Soft and substantial. Wax Wear makes their waxed canvas exclusively in New Jersey (which may or may not contribute to the famous Jersey "smell"). Available in Hunter Green and Black. Lots of pockets, button tabs at the waist; a very versatile wardrobe addition. S-XL $172

Hunter S. Thompson knows how to apply for a job

I got a hell of a kick reading the piece Time magazine did this week on The Sun. In addition to wishing you the best of luck, I'd also like to offer my services.

Since I haven't seen a copy of the "new" Sun yet, I'll have to make this a tentative offer. I stepped into a dung-hole the last time I took a job with a paper I didn't know anything about (see enclosed clippings) and I'm not quite ready to go charging up another blind alley.

By the time you get this letter, I'll have gotten hold of some of the recent issues of The Sun. Unless it looks totally worthless, I'll let my offer stand. And don't think that my arrogance is unintentional: it's just that I'd rather offend you now than after I started working for you.

I didn't make myself clear to the last man I worked for until after I took the job. It was as if the Marquis de Sade had suddenly found himself working for Billy Graham. The man despised me, of course, and I had nothing but contempt for him and everything he stood for. If you asked him, he'd tell you that I'm "not very likable, (that I) hate people, (that I) just want to be left alone, and (that I) feel too superior to mingle with the average person." (That's a direct quote from a memo he sent to the publisher.)

Nothing beats having good references.

Of course if you asked some of the other people I've worked for, you'd get a different set of answers.

If you're interested enough to answer this letter, I'll be glad to furnish you with a list of references — including the lad I work for now.

The enclosed clippings should give you a rough idea of who I am. It's a year old, however, and I've changed a bit since it was written. I've taken some writing courses from Columbia in my spare time, learned a hell of a lot about the newspaper business, and developed a healthy contempt for journalism as a profession.

As far as I'm concerned, it's a damned shame that a field as potentially dynamic and vital as journalism should be overrun with dullards, bums, and hacks, hag-ridden with myopia, apathy, and complacence, and generally stuck in a bog of stagnant mediocrity. If this is what you're trying to get The Sun away from, then I think I'd like to work for you.

Most of my experience has been in sports writing, but I can write everything from warmongering propaganda to learned book reviews.

I can work 25 hours a day if necessary, live on any reasonable salary, and don't give a black damn for job security, office politics, or adverse public relations.

I would rather be on the dole than work for a paper I was ashamed of.

It's a long way from here to British Columbia, but I think I'd enjoy the trip.

If you think you can use me, drop me a line.

If not, good luck anyway.

.....The fourth paragraph in particular resonates with me personally.... I learned a very important lesson recently about being honest with those you work for....

Dickies has taken a page out of Tom's Shoes' playbook and put together a "you buy one, we donate one" special edition 874 pant. Dickies will donate the pants to Detroit Salvation Army workers in need. An easy cause to get behind, and an easy purchase at $50. Classic Navy twill with just enough pizzaz (red stitching and a special tag), to remind yourself a few months from now that you did something charitable... My pair are in the mail Avail. at Dickies.com
Posted by Craft at 2:16 PM 1 comment:

The "American" way or the right way? Discuss.... 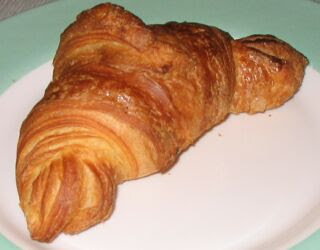