The first two styles from Greg Chapman's new Perfecto arm of the Schott Company have arrived! Despite Greg's insistance on being British, we like him anyway..... and the Perfecto stuff is absolutely gorgeous.

First up is the Horse Hide "Carney" Jacket: "Mens 1930's inspired delivery/riders jacket. In times of need if a manufacturer ran out of a color they would simply compromise with another, making the two-tone trim authentic to the period."
Two-Tone Black/Brown horsehide. Brass zippers throughout. Brass side buckles. Leather windflap behind zipper. Collar buttons down with hidden snaps. 100% Cotton plaid lining.
This jacket is absolutely gorgeous. $898 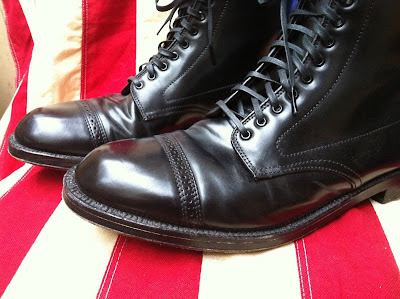 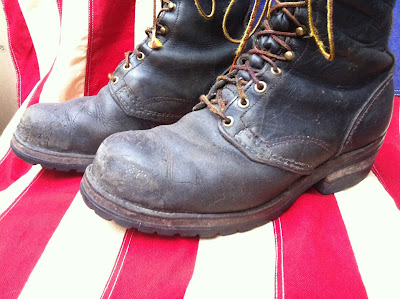 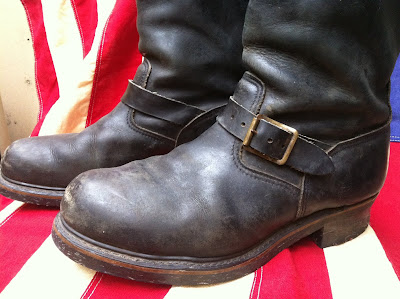 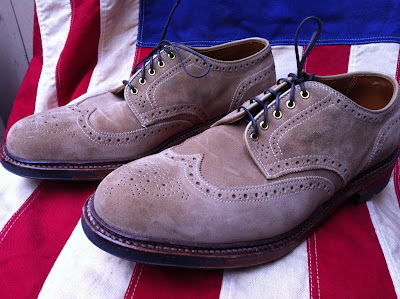 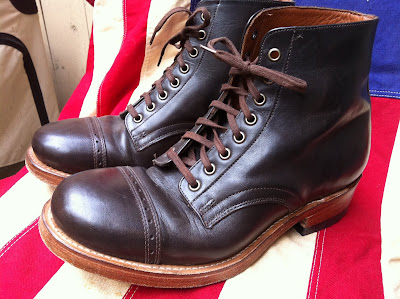 "Philadelphia circa 1910. "City Hall." Philadelphia's soot-stained City Hall, still the largest municipal building in the United States, was for a time the tallest building in the world, at 548 feet. Its epic scope includes the time it took to complete, with construction beginning in 1871 and dragging on well into the 20th century -- the project's main architect died in 1890; his successor's successor expired in 1910, still on the job nine years after the building had been turned over to the city. So glacial was the pace of construction, according to one history, that a major round of revisions had to be undertaken to account for "the invention of electricity and elevators." 8x10 inch glass negative, Detroit Publishing Co" (via Shorpy)
Posted by Craft at 2:54 PM No comments:

If ever there was a week to buy a slicker:

The Blk Pine Wax Canvas helmut bag has arrived. Great for everyday use. Light and soft, yet as durable as ever. Black or Olive. $206
Posted by Craft at 6:27 PM No comments:

After an election where the only resounding message that seemed to cross partisan lines was the public's intolerance for government spending and a growing deficit....... The first major bi-partisan action taken by the lame-duck congress is:
Extension of tax cuts that aren't, and were never paid for, even for the wealthy........ Spending.
Extension of government unemployment benefits for another year..... More spending (The spending that I support, however....for whatever its worth).
Its like the two parties are arguing over the steak or the lobster on our dime.... and their compromise (to each other, mind you. Not to us... god forbid) is to buy both.
Atleast the Democrats are sacrificing their ideals to extend benefits to those that really need it. The Republicans are sacrificing their hatred of helping poor people to coddle their money interests.
This bullshit is why voter turnout is so low in our country.
Posted by Craft at 12:13 PM 2 comments:

We made jeff put on Kapital and pretend to get a haircut.

Natural indigo for days.
Lush textiles. Incredible feel
Manufactured in their legendary and unrivaled factory in Okayama.
Hand embellishment (Had a chance to spend some time with the head of the Kountry division on our recent trip to Tokyo.... Amazing)
Gypsy-Indigenous-Americana-Workwear, executed unlike anywhere else in the world.
Looks books shot by photographer Eric Kvatek (Whose resume is as impressive as is aesthetic).
Inspirational fodder for the industry for YEARS.....Now finally available for sale for the rest of us
We are proud to be amongst the obnoxiously short list of retailers of Kapital outside of Japan
Lots of archived lookbooks on their site to get you familiar.... and thirsty. And a new short video teaser of the Spring/Summer '11 show.... Get some
All pics are from the current GoWest collection, the first delivery of which is in store now.
Posted by Craft at 4:47 PM No comments: 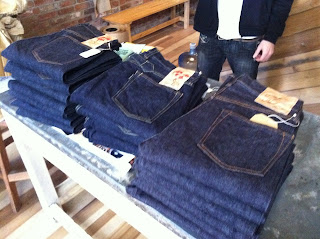 Just imagine how absurd our political process is gonna look 50 yrs from now.... 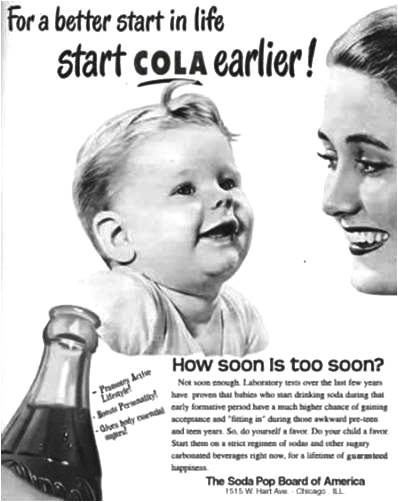 (found on VintageEngineerBoots)
Posted by Craft at 9:47 PM No comments:

Good gut check.... You think you're hardcore? You're nothing. You are a pussy. Try again next year.

If you're traveling this weekend and you "opt out" of the body scan, you know you're gonna get patted down.....
Now I wonder.... Typically they have male TSA agents pat down men, and women agents pat down the ladies.... What if you tell your friendly neighborhood TSA agent that you're gay.... Can you request a pat down by an opposite gender agent? What if the agent is gay? What if he's gay AND handsome? I have questions....
Somebody try this for us and let us know how it goes
Posted by Craft at 10:05 PM 2 comments:

I'm not even into bicycles like that.... but this shit is just straight inspiration. Skill and Film making in equal doses.

1939 Clothiers: Look for the Eagle 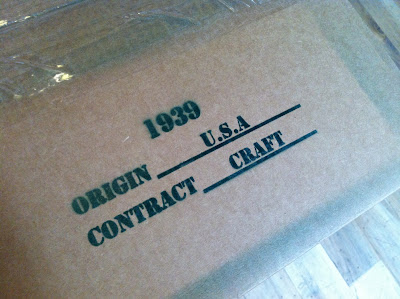 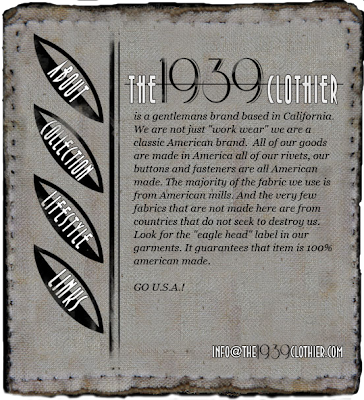 We're pleased with how 1939 is stepping out onto the scene. As their breakout collection, we're rather impressed with the wearability, quality of construction, and manufacturing team 1939 has acheived. Victor went above and beyond with his American sourcing game. Fabric, buttons, hardware..... His sewing team cut their teeth assembling U.S. Navy uniforms for the past 20 years. This stuff is legit, well made, and handsome. That naval pullover? Fire. Hot fire. And don't sleep on the canvas carpenter pant. Only a few pair available... A great alternative to a denim heavy wardrobe 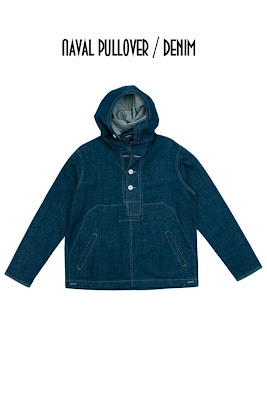 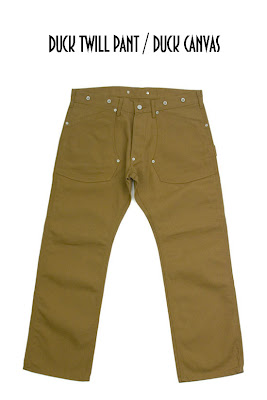 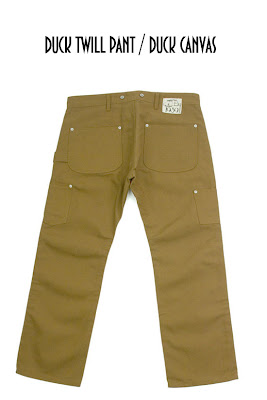 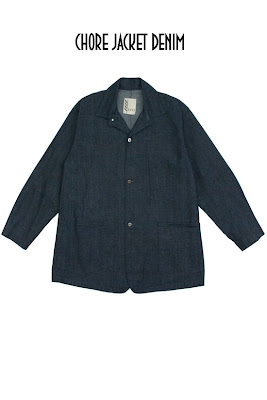 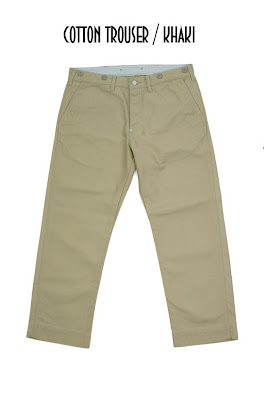 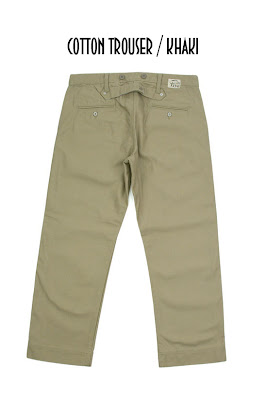 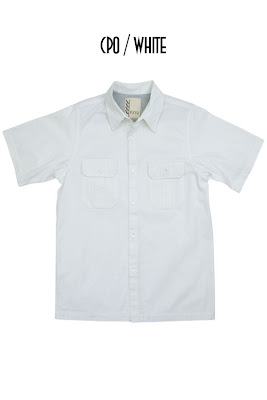 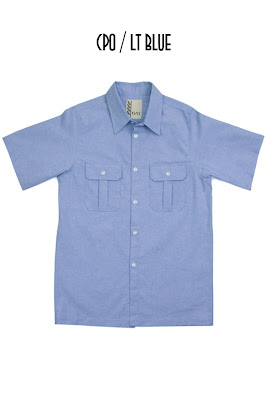 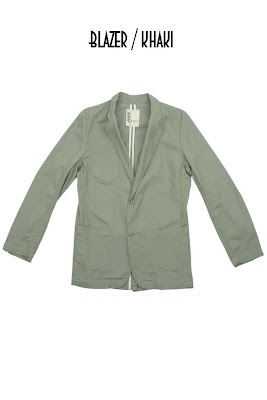 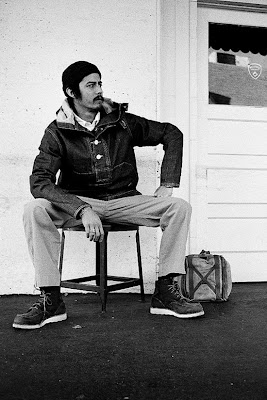 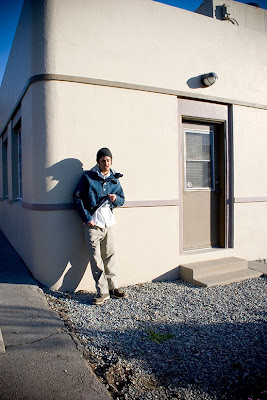